There is currently only one NordicTrack cross-country ski machine model being manufactured, the classic NordicTrack “Pro” skier. There were many other models produced in the past, all featuring NordicTrack’s patented flywheel & one-way clutch mechanism, adjustable upper and lower body resistance, and the ability to fold for storage.

All models feature the same full-body motion that mimics cross-country skiing. Each model provides a great aerobic workout, but the machines will be more comfortable and easier to customize as you move up the product line.

Although the NordicTrack Pro is the only model that is currently made, previous models included both more bare-bone models (no handlebars, wheels, or adjustable front elevation) and more premium models (automatic elevation adjustments, walnut construction, brass accents). Learn more about the features and benefits of NordicTrack ski machines below. 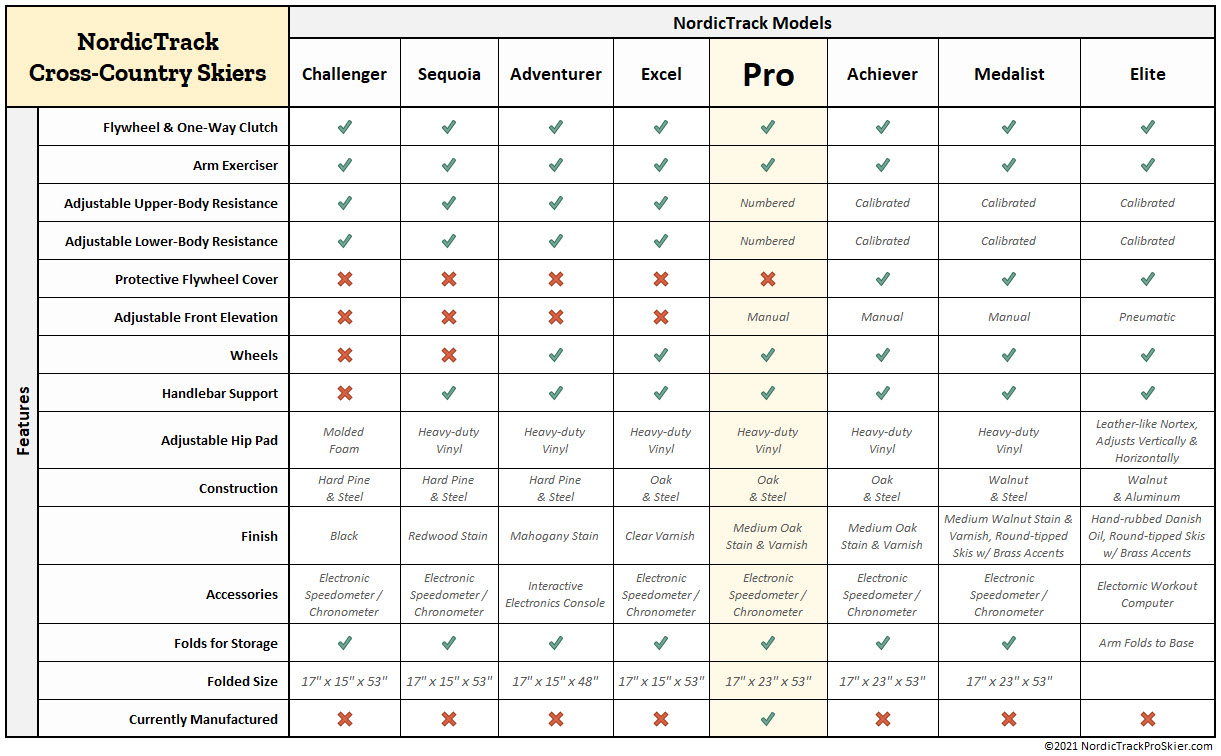 Features on All NordicTrack Ski Machines

Your choice of NordicTrack model will make the difference in how comfortable and feature-rich your workout will be. Think of these different exercise machine models as different models of a car: any car can get you from point A to point B, but the ride will be more comfortable in a luxury car versus an economy car.

All NordicTrack skiers feature the patented flywheel and one-way clutch mechanism plus an adjustable arm exerciser. Select models also allow the front elevation to be adjusted to work on different muscle groups. The non-impact exercise is ideal for overall conditioning or practicing cross-country skiing during the off-season.

This basic cross-country machine provides a non-impact workout with adjustable resistance for both the upper and lower body. While there are no additional bells and whistles on the NordicTrack Challenger model, it still offers a great cross-country skiing workout for anyone on a budget. 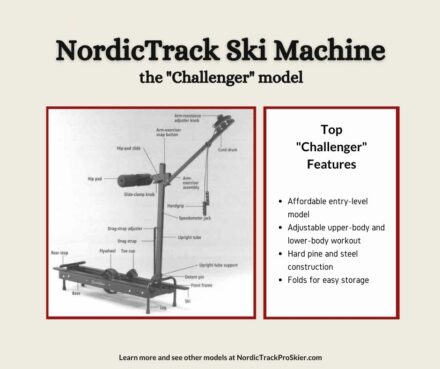 The NordicTrack Sequoia was a step up from the entry-level Challenger and provided a few key upgrades that were well worth the money.

In a side-by-side comparison (this was easy at the retail stores in the 1990s), it was noticeably more comfortable on the Sequoia versus the Challenger model. For starters, the handlebars make getting on and off the machine much easier. Next, the upgraded hip pad makes a huge difference in comfort. Finally, the addition of the pulley system on the upper-body resistance mechanism provides a more natural angle for the upper-body resistance and a better overall workout experience. 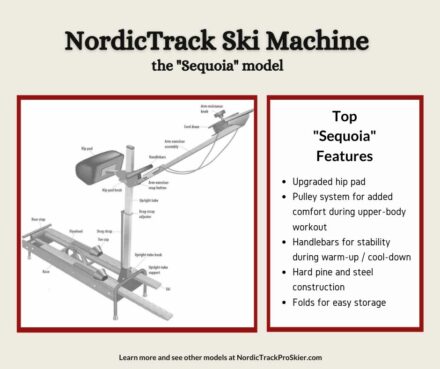 The “NordicTrack 303” and “NordicTrack Adventurer” were similar models to the NordicTrack Sequoia. These machines will have similar main features, but be built with different materials and/or have other cosmetic differences.

The NordicTrack Excel is the original NordicTrack ski machine and the first model in the line to include rear wheels for ease of transport between uses. The Excel is constructed of oak and steel and is finished with a clear varnish. 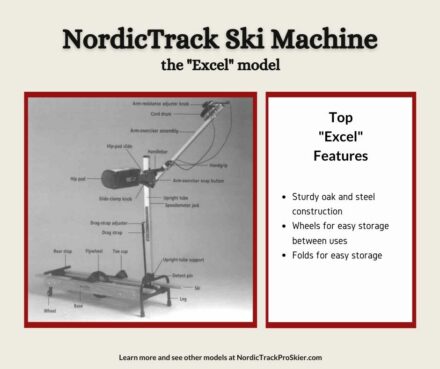 The “NordicTrack 505“, “NordicTrack Classic“, and “NordicTrack 20th Anniversary Special Edition” were similar models to the NordicTrack Excel. These machines will have similar main features, but be built with different materials and/or have other cosmetic differences.

The #1 selling model and the only model that is currently still made, the NordicTrack Pro is a feature-packed exercise machine that provides both great value and a great workout. The no-impact, non-motorized workout is quiet and works most of the major muscle groups in the body. 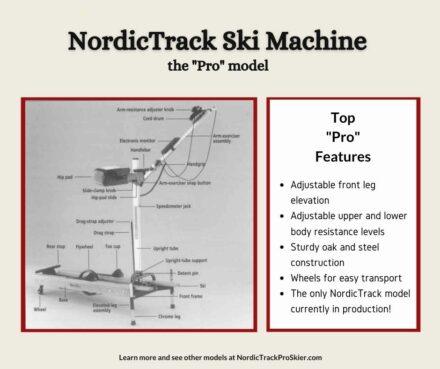 Pro models and above all feature a wider front frame for added stability and adjustable front-end elevation!

The NordicTrack Pro model is in the center of the product line and has a weight limit of 250-pounds. Please note that other models are made of different materials and have different weight limits.

The NordicTrack Achiever has a calibrated lower-body resistance mechanism that provides a smooth way to adjust resistance in the middle of the workout. The solid machine feels exceptionally sturdy and smooth during workouts. 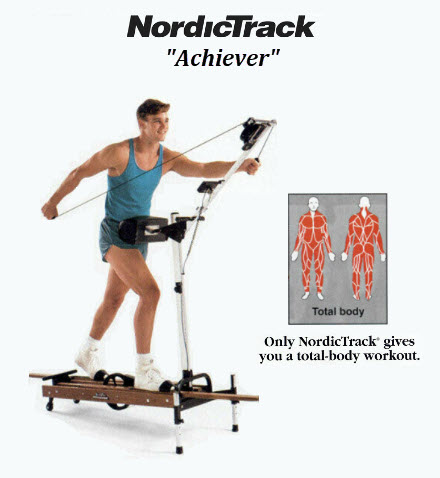 Combining beautiful form and function, the medalist features walnut and steel construction and attention to aesthetic details like beveled skis with brass accents. 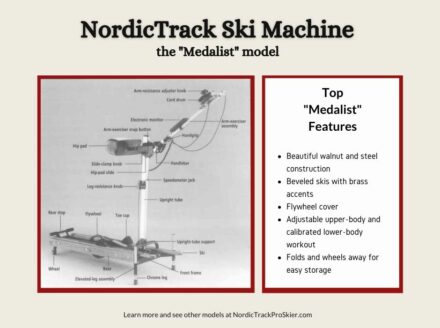 The NordicTrack Elite was the top of the line of the home cross-country ski machines. This beautiful machine had a furniture-like finish of rich, dark walnut and brass hardware accents.

The front elevation featured a pneumatic lift so that adjustments could be easily made with the touch of a button. The vertical post was welded on and did not fold for storage, but it did provide an exceptionally smooth and sturdy workout experience.

The Health Club 900 and Health Club 900T NordicTrack models were made exclusively for health clubs and gyms (no home / residential sales). These machines were made of metal and included features like rear wheels, pneumatic front-end elevation, and a more gym-friendly version of the lower-body resistance mechanism that included “foot glides” on tracks instead of removable wooden skis. 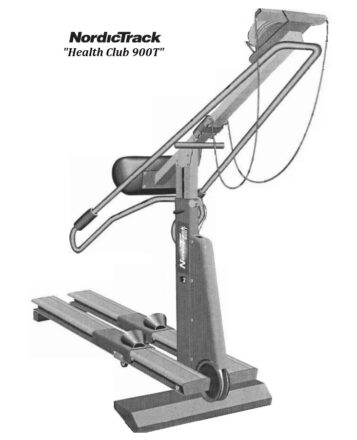 The main lines of US NordicTrack models are featured above, but you may come across additional machines that had limited runs of production or were sold in other markets. These machines still provide the same simulated cross-country exercise, but the machines can look and feel somewhat different from the main NordicTrack product line. 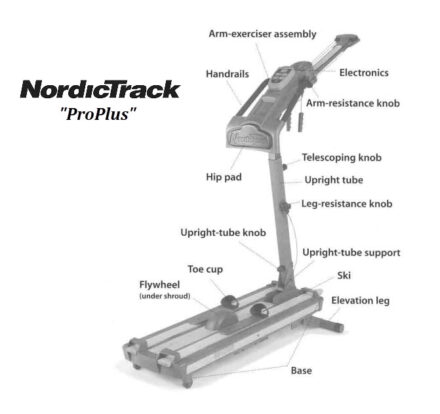 NordicTrack machines with the word “Plus” in the name often have very striking differences from their standard models. The ProPlus (pictured above), Achiever Plus, and MedalistPlus models feature major differences like handrails that are not found in any of the standard models of ski machines.

NordicTrack cross country skiers with the word “Sport“, “ExerScience“, or “ES” in the name are likely to be made of a composite material instead of the traditional wood and metal construction. These limited edition models were able to offer a cross-country ski machine at a lower price point, but the composite materials often made for a less sturdy-feeling experience.

While all machines will provide a great full-body workout, it’s helpful to know which features are included with each machine.

Although there was once a wide variety of new NordicTrack models to choose from, today the only NordicTrack model currently produced is the “NordicTrack Pro”. Information about the other machines has been provided as a reference for anyone researching older NordicTrack machines.

If you have recently purchased a NordicTrack, make sure it will run smoothly for years with the quick and easy recommended NordicTrack maintenance. 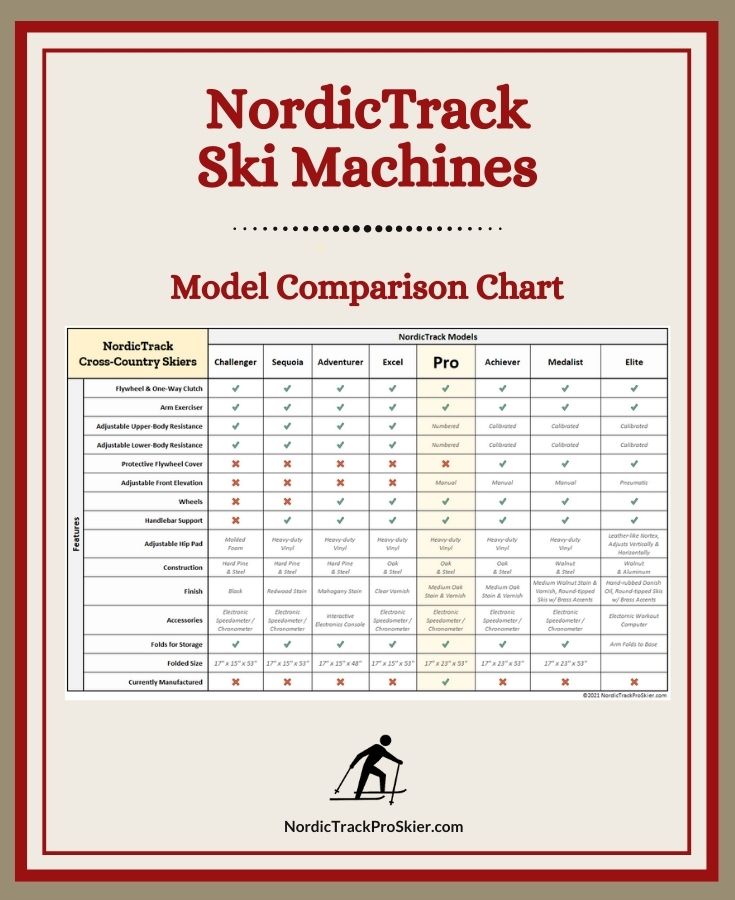 Thanks for visiting NordicTrack Pro Skier, where I share my experience with and knowledge of what I consider to be the BEST piece of at-home exercise equipment on the market!

Read more to learn about the NordicTrack Pro Skier that's been a challenging workout in my home for decades!

NordicTrackProSkier.com is supported with commissions from affiliate links contained on this site.